On the eve of International Torture Day 2011 Peaceful protest staged Jointly by JK Salvation Movement & Association of Affected Families under the chairmanship of Zaffar Akber Bhat who is the head and Sr. Hurriyat leader,at civil lines srinagar today on 25 June 2011.

The senior Hurriyat Leader and Chairman Salvation Movement and Joint Association of kasmiri Affected Families Jinab Zaffar Akber Bhat,On the eve of celebrating of this years U.N.TORTURE DAY 2011along with other nations of the Globe supported the genuine Rights and the interests of inhabitants of our Mother land Jammu and Kashmir necessarily to be dfended in accordance with the guaranteed Rights and assurances through this MEDIA COMMUNIQUE as under:.

The history of the genuine movements has experienced and faced the mental. Physical and psychological torture in the recent past in many corners of the world. In response to such inhuman and barbaric tactics the civilized international thinkers and human rights leaders has extended their sincerest support for organizing of seminars and conferences against the torture globally. Here in this part of the world the inhabitants of the civil society are subjected to torture and humiliation in their every day business from dawn to dusk, under the cover of the strictest provision of Armed Forces Special Powers Act, Disturbed Area Act, Public Safety Act etc. in force here since long. The present ground scenario is normal in its self explanatory nature to some extent and as such in any way not presents the slightest look of war zone like situations. Under these circumstances the trampling of the internationally guaranteed Human Rights and dealing of peaceful public with violent force also can be termed as a “mass torture” which in no way has any justification to support. Torture in any form and any where and at any stage of public movement is condemnable and as such the policy of torture is condemned on this U.N. Torture Day 2011 under same spirits as worked out against the torture globally by the civilized Human Rights leaders of the civilized nations. The barbaric state actions have resulted in thousands of killings, custodial deaths and Disappearances. The families of those killed or Disappeared and the slain militants are continuously being harassed systematically under a preplanned torture policy since long.

On the occasion of this year’s U.N.TORTURE DAY 2011 the J & K Salvation Movement and Joint Association Of Kashmiri Affected Families Jointly appeals the Amnesty International H.R.Organization for their sincere intervention providing for earliest revocation of Draconian Laws and to Forced Torture policy form the soil of Kashmir. 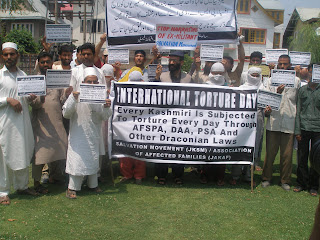 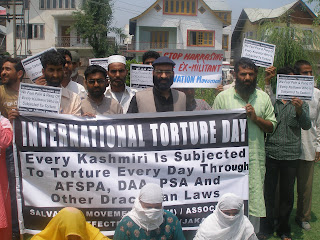 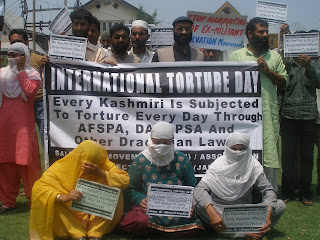 Posted by Unknown at 1:58 AM No comments:

The Salvation Movement has said that the is a disputed territory and no one can deny the historic and political realities.

JKSM Chairman, Zaffar Akbar Bhat while addressing a party meeting said it is because of unresolved Kashmir that the people of Kashmir are facing miserable condition and uncertainly in the region, adding that the key of peace is in the resolution of .

Bhat also strongly condemning the statement of Indian Congress leader, Makhan Lal Fotedar’s on dispute said that such statements are meaningless and it is due to Indian rigidity and military might designs that the dispute is unresolved. He urged Indian government to accept ground realities and come forward for the resolution of through tripartite talks.

Bhat while welcoming the recent European Parliament’s resolution on Kashmir and hoped that the EU, and other peace loving countries would increase their efforts to seek permanent solution of the dispute in accordance with the aspirations of Kashmiri people.

Meanwhile Zaffar Paid rich tributes Abdul Latief @Chaha on his 21 death anniversary .Zaffar Akber Bhat reiterated that we will continue the political struggle for resolution of dispute according to wishes of Kashmiri people .