The salvation movement constituent of APHC, Today on 31 December 2009, organized a peaceful unique protest in partap park Srinagar. The aim and objective of the peaceful function was to highlight the sufferings of kashmiries besides inviting the attention of peace lover human rights organizations and the respected H.R. activists at international level.
The chairman, Mr.ZAFFAR AKBER BHAT represented the continuing arrests, detentions, raids, custodial killings, tortures. Molestation and fear and agony posed a “BEHIND THE BARS SIT-IN’’ along with his associates, in presence of the prominent print and electronic media functionaries.
The chairman, highlighting the most sensitive issue of MASS GRAVES, use of force, detention under Armed Forces Special Powers Act (AFSPA) and Public Safety act (PSA), addressed the peace loving international communities stressing for their earliest effective role for honorable and respectable everlasting settlement of Kashmir issue. The chairman further raised the issues of the harassment and thrashing of print and electronic media persons by security forces, Para military forces during their professional journalistic duties. It was at this point of time that the police and their other related agencies arrested the chairman, Mr Zaffar Akber Bhat along with dozens of organizational activists and seized the all available materials like play cards, cage etc from the site.
The organization condemns the arrest of Zaffar Akber Bhat and on the spot forcible action against the activits of the organization and the participants of the protest. 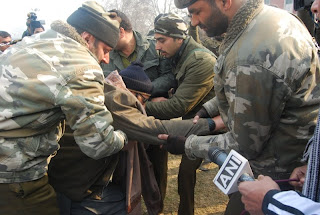 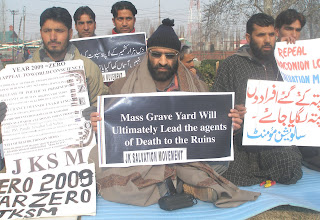 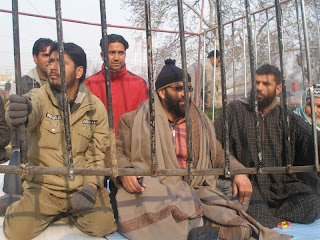 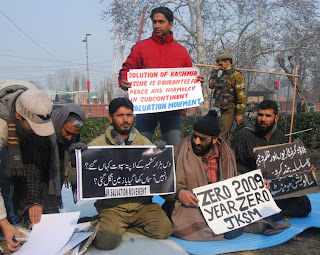 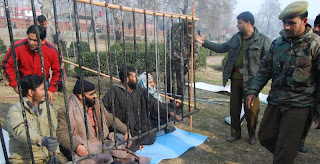 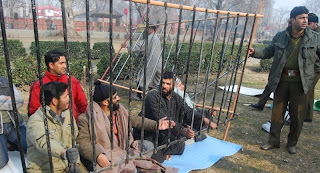 Posted by Unknown at 3:10 AM No comments:

Posted by Unknown at 8:17 AM No comments: 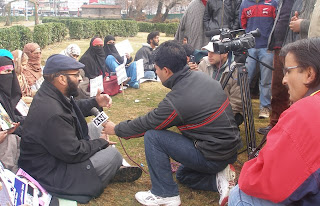 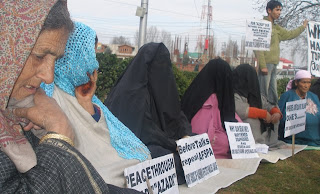 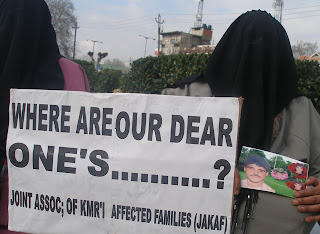 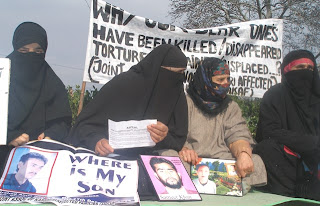 Posted by Unknown at 5:58 AM No comments: 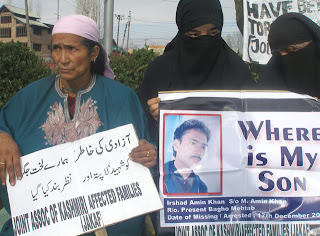 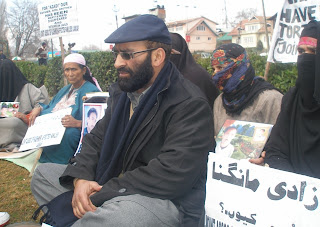 The activists of Joint Association of Kashmiri Affected Families(JAKAF) held a silent protest sit-in at Partab Park /Press Colony in Srinagar, today, againstthe practicescustodial disappearances and tortureby the Indian troops,police and paramilitary forces in Kashmir.
The spokesman of the Association, briefing to the media men in Srinagar, said that the purpose of holding of the sit-in was to draw attention of the International Human Rights Organizations towards the custodial disappearances in Kashmir, illegal detention of the pro-liberation leaders, activists and torture against Kashmiri detenues during interrogation process.He said that the Govt of India and its regime are deliberately lingering the issue of disappeared persons to hush up the matter. While expressing dissatisfaction over the judicial system, he emphasized to constitute an Independent Commission to probe the matters pertaining to custodial disappearances and killings etc.
Meanwhile, APHC senior leader, Zaffar Akbar Bhat while addressing the participants of the sit-in, said that India should withdraw its troops, repeal all the Draconian laws and release all the illegally detained pro-freedom leaders and activists before starting meaningful talks to resolve the Kashmir dispute. He also appealed the world community and Human Rights organizations in the fitness of the desired peace and stability of the region, by playing effective role in settling the longest pending dispute of Kashmir.
Spokesman Ger.Secetry Chairman Chief Patron
Miss, Haseena Miss, Shazia Mr.G.M.Dar Mr.Zaffar Akber Bhat 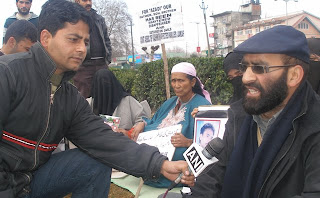 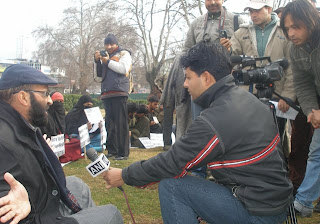 Protest of parents of Martyred, Disappeared, Tortured and Displaced persons sit-in protest at Partap Park /Press Colony in Srinagar on 17th December 2009
Why world conscience is sleeping when unresolved Kashmir is burring and bleeding?
*Why right of self-determination is illegal and crime in disputed territory? Why Indian forces are killing our children, women and relatives during peaceful struggle of right to self-determination when Indian Prime Minister Jawaharlal Nehru has said in the Indian Parliament on March 31 1955 “Kashmir is not a thing to be bandied about between India and Pakistan but it has soul of its own and an individuality of its own. Nothing can be done without the goodwill and consent of the people of Kashmir”.*Nehru, Indian Prime Minister's statement in Indian Parliament, February 12, 1951. "We had given our pledge to the people of Kashmir, and subsequently to the United Nations; we stood by it and we stand by it today. Let the people of Kashmir decide".
*Then why to hold on!
“…. We all agreed that it is the people of Kashmir who must decide for themselves about their future externally or internally. It is an obvious fact that, even without our agreement, no country is going to hold on to Kashmir against the will of the Kashmir’s”. Nehru, Indian Prime Minister's statement at press conference in London, January 16, 1951. Reported in The Statesman, New Delhi January 18, 1951)JAKAF concerns:* FAQ’s¬¬¬¬¬¬----- Frequently Asked Questions
* Where are our dear ones who disappeared in Indian troops and police custody?* Why Kashmiri people are detained under draconian laws with out any rhyme and reasons?* Why Kashmiri women, mothers and sisters are made war weapon in Jammu and Kashmir* Why Kashmir’s property, residential houses and business centers are destroyed with heavy mortar shelling during siege and search operations?* Why doesn’t India give up intransigence on Kashmir?* Indian armed and paramilitary forces in Kashmir commit mass Human Rights violations with impunity * AFSPA a major contributor to Rights Violations * Disappearances, Rapes, Extra Judicial Executions and Killings resulting from torture facilitated by AFSPA * Thousands have disappeared over the 20-years in Kashmir * Victim families still waiting for justice * Why Indian troops have illegally occupied the land (paradise on earth) of Kashmiri’s
Spokesman Gen.Secretry Chairman Cheif Patron
Miss,Haseena Miss, Shazia Mr.G.M.Dar Mr.Zaffar Akber Bhat 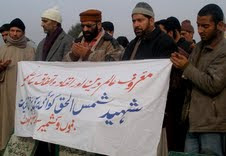 Posted by Unknown at 1:24 AM No comments:

Posted by Unknown at 7:15 AM No comments:

Indian paramilitary forces and police men fired tear gas in main city Srinagar, today, to disperse hundreds of demonstrators protesting a near-fatal attack on senior APHC leader, Fazal Haq Qureshi, by unidentified assailants. He was critically injured near his residence in Soura Srinagar late Friday. The All Parties Hurriyat Conference has called for the shutdown strike in to protest against the assassination attempt on APHC leader, Fazl Haq Qureshi. Demonstrations erupted Saturday in various parts of the Srinagar. Chanting, "We want freedom," the protesters burnt tires and paramilitary forces who swung batons and fired tear gas to disperse them.
People took to the streets in Nowhatta, Gojwara, Rajauri Kadal, Malaratta, Khawaja Bazaar, Saraf Kadal, Soura, Sopore and Islamabad areas, reports said. At least a dozen people were injured in the city. Qureshi underwent a four-hour long operation in Soura Medical Institute and is now on a ventilator for respiratory support. "His operation was conducted last night which continued till 11:30pm and the doctors said he is stable but critical," Tariq Andrabi, a close relative said.
Qureshi is in the Intensive Care Unit (ICU) of the hospital under tight security and no one is allowed to meet him except close relatives, Andrabi said. Doctors had said a bullet has pierced his head.
Mirwaiz Umar Farooq, said the attack would not deter the alliance from carrying forward peace talks, both with India and Pakistan.
"We want to tell those elements (attackers) that Hurriyat will not be threatened by these attacks, we will not pull back, we make a commitment that we will take this issue to its logical conclusion," Mirwaiz said on Saturday.
"There are certain elements within Kashmir who do not want a permanent solution to the problem. They want to continue the uncertainty so that their vested interests are protected. "We have vowed to stand by the sacrifices of the martyrs and work for a peaceful solution to the Kashmir problem by talking to both Pakistan and India," Mirwaiz told reporters outside the hospital where Qureshi is being treated.
The APHC Chairman, Mirwaiz Umar Farooq, talking to media men in Srinagar said that the Kashmiri Hurriyet leadership would not be cowed down by such attacks and the path of self-determination would be perused, come what may.
Those who visited Soura hospital to enquire about the health of Fazl Haq Qureshi included, Mirwaiz Umar Farooq, Syed Ali Gilani, Zaffar Akbar Bhat, Professor Abdul Ghani Bhat, Shabir Ahmad Shah, Nayeem Ahmad Khan, Mohammad Azam Inqilabi, Agha Syed Hassan Al-Moosvi, Mukhtar Ahmad Waza, Yasmeen Raja and Mohammad Yousuf Naqash. They described the attack as an abominable and inhuman act.
The heads of Kashmir Centres in Washington, London and Brussels, Dr Ghulam Nabi Fai, Professor Nazir Ahmad Shawl and Barrister Abdul Majeed Tramboo, Mehmood Ahmad Saghar, Tufail Altaf Bhat, Raja Shaheen, Mohammad Farooq Rehmani and Sheikh Mohammad Yaqoob in their statements condemned the assassination attempt.
Posted by Unknown at 6:18 AM No comments: