JAKAF today on 31st Jan Sunday organized press conference at press colony on the advice of APHC Leader and Chief Patron of JAKAF Zaffar Akber Bhatt. Talking to media persons said:-
Joint Association Of Kashmiri Affected Families (JAKAF) expresses concern over the continued gross human rights violations, killings, arrests and other types of atrocities inflicted upon innocent people in Kashmir by men in uniform that has made the life of people miserable. We are urging International community to take strong notice of the situation of the Jammu and Kashmir and send its teams to monitor the worse situation of the territory.
The first month of the year has witnessed a stepped up increase in human rights violations and civilians killings.
JAKAF observes a sharp rise in civilian and innocent killings by the Indian forces across the Jammu and Kashmir. Since 1st of January 2010 almost dozens of civilian killings have taken place at the hands of the forces and in this unabated spade of extra judicial killings young boys are deliberately and intentionally being targeted by the forces.
At Yakmanpora Parihaspora Patton on January 22, a young student namely Manzoor Ahmad Sofi was deliberately and intentionally killed and at least 15 persons injured by the forces of 10 IRP battalion.
Similarly the paramilitary forces of 62- 44 Rashtriya Rifles Shadimarg Camp and SOG Pulwama in Kalmpora Shadimarg Pulwama killed one 35- year old civilian, Mushtaq Ahmad Mir who was asked to provide a human shield to the forces.
On 6 January Mohammad Akbar Lone of Tangmarg was killed and media persons including one photojournalist Aman Farooq and Raouf Ahmad were deliberately shot by police official in Lal Chowk area.
one eleventh class student, Anayat-ul-lah Khan of Dalgate Srinagar was fired to death by the CRPF personnel deployed in Lal Chowk Srinagar on January 7.
On January 7, Mohammad Iqbal Bhat son of Mohammad Ahsan was arrested and disappeared in SOG camp at Dohnipora Lolab.
On January 16 the personnel of Central Reserve Police Force and Special Operation Group killed one Pervaz Ahmad Hajjam son of Ghulam Hassan Hajjam at Arampore Sopore.
One January 17, Mohammad Iqbal Malik son of Mohammad Shaban Malik of Lachampora Rajwar Handwara was arrested and in missing in custody.
Troops on January 19 killed Manzoor Ahmad Bhat son of Ghulam Nabi Bhat of Drangbal.
On January 20, a young boy, Mudassir Ahmad Teli of Urdu Bazar Srinagar was booked under draconian Public Safety Act on fake charges.
Another student namely Zahid who is struggling for life in the SMHS Hospital was shot at and injured by troops.
Policemen and paramilitary personnel ransacked the houses at Abhama, Kharanbal, Ahrabal Kulgam, Khrew Pulwama, Batamaloo and downtown areas in Srinagar.
The Association is in receipt of reports from various areas where the forces have unleashed a reign of terror and even the bereaved families are not allowed to mourn the death of their kiths and kins.
In this context it is worthwhile to mention that in Handwara the bereaved family of 70- year old deceased Ghulam Ahmad Sofi of village Ringpaith Kralgund Handwara was in clear-cut terms directed by the concerned forces not to observe the Resm-i-Chaharum of th 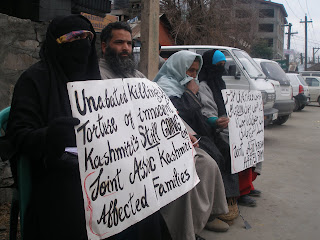 e said deceased on 26.01.2010.
Policemen and troops are perpetrating gross human rights violations in the territory with impunity. India should repeal all draconian laws and withdraw its troops before initiating meaningful dialogue process for the settlement of the Kashmir dispute.
The Association while paying rich tributes to the deceased persons expresses complete solidarity with the families of the victims. These killings were described inhuman and it was observed that the policemen and paramilitary forces have launched afresh-oppressive methods to terrorize the people and unnerve the freedom loving people in Jammu and Kashmir.

Zaffar Akber Bhat
Posted by Unknown at 2:21 AM No comments: 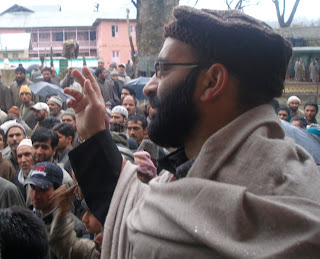 India can’t suppress righteous movement Srinagar, January 29: The senior APHC leader and Chairman of Jammu and Kashmir Salvation Movement, Zaffar Akbar Bhat has expressed hope that the international community will take serious and solid steps for amicable and peaceful solution of the Kashmir dispute. He reiterated that India cannot suppress the ongoing liberation movement through use of brute force and atrocities as the people of Kashmirare struggling for securing right to self-determination.
APHC leader, while addressing a Juma gathering at Beerwah in Budgam, appealed the world community and the international human rights organisations to take notice of continued human rights violations by police men and paramilitary forces in Jammu and Kashmir and put pressure on India to resolve the Kashmir dispute in accordance with Kashmiris’ aspirations. He also condemned the use of teargas, lathi charge and bullet shots on peaceful demonstrators in Srinagar, Sopore, Baramulla and Pulwama areas.
Urging India to start negotiations to settle the Kashmir dispute, Bhat said the Kashmir dispute was so still unresolved due to rigid stance and military might policies of India.
He said that the people of Kashmir had rendered unprecedented sacrifices and they would continue their just struggle for securing right to self-determination till its logical conclusion. Bhat while paying rich tributes to Kashmiri martyrs including Shaheed Shamsul Haq, Mohammad Ashraf Dar, Nasirul Islam, Maajed Dar, Muzaffar and others said that the sacrifices of the martyrs will not go waste.
Demanding an immediate release of all detained Hurriyet leaders and activists, Bhat said that they were deprived of basic facilities in the jails and were suffering from several diseases in the jails.
Later, JKSM C 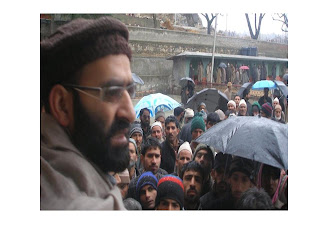 hairman, Zaffar Akbar Bhat visited the house of one religious scholar, Syed Mohammad Lateef, and expressed profound grief and sorrow over the sad demise of the mother of the scholar. He offered Fateha for the departed soul and prayed Allah Almighty to give courage to the bereaved family to bear the irreparable loss
Posted by Unknown at 7:41 AM No comments:

Posted by Unknown at 6:38 AM No comments: 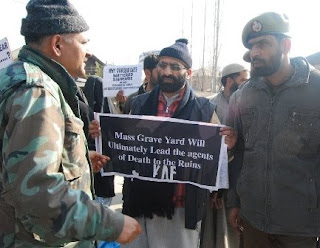 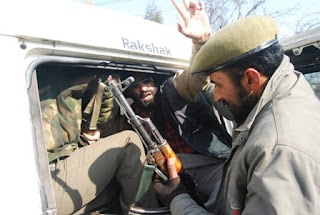 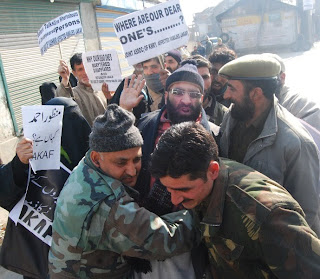 The activists of Joint Association of Kashmiri Affected Families (JAKAF)held a silent protest at Srinagar, today against the practices of custodial disappearances, unidentified mass graves and torture by the Indian troops, police and paramilitary forces in Kashmir.
The spokesperson of the Association, briefing to the media men in Srinagar, said that the purpose of holding of the peaceful protest was to draw attention of the International Human Rights Organizations towards the custodial disappearances in Kashmir, illegal detention of the pro-liberation leaders, activists and torture against innocent Kashmiri youths during Army operations /Crackdowns /searches / interrogation process.
He said that the Govt of India and its regime are deliberately lingering the issue of disappeared persons to hush up the matter. While expressing dissatisfaction over the judicial system patronised by the authorities, he urged for an Independent commission to probe the matters of custodial disappearances, killings and continued human rights violations.
On the other hand, senior Hurriyat Leader and Chief Patron of JAKAF, Zaffar Akbar Bhat was arrested when he led to join sit-in at Press colony Srinagar.
Zaffar Akbar Bhat while talking to Media, said that India should withdraw troops, repeal all the Draconian laws, whereabouts of custodial disappearances, identify mass graves and release all the illegally detained pro-freedom leaders and activists before starting meaningful talks on Kashmir dispute. He also appealed to the world community and Human Rights organizations to play its effective role in resolution 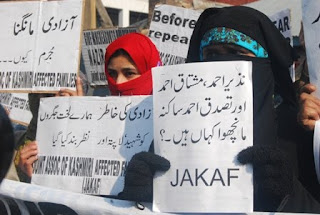 of the lingering Kashmir issue.
Bhat also urged for tripartite dialogue process on Kashmir involving Pakistan, India and the Kashmiri leadership. He pointed out that the huge presence of the troops in Kashmir was the basic cause of every problem in the region
Posted by Unknown at 6:00 AM No comments:

Posted by Unknown at 7:19 AM No comments:

The senior APHC leader and Chairman of Jammu and Kashmir Salvation Movement, Zaffar Akbar Bhat paid glowing tributes to the memory of noted liberation leader and one of the founder commanders of Hizb-ul-Mujahideen Shaheed Ghulam Rasool Dar alias Riyaz Rasool on his martyrdom anniversary, today. Chairman of Salvation Movement, Zaffar Akbar Butt addressing a gathering at the party headquarter in Srinagar reiterated the pledge to take the mission of martyrs to its logical end. He said that Shaheed Riyaz dedicated his life to the cause of Islam and freedom of Kashmir. He described the martyrdom of Riyaz Rasool a great loss to ongoing freedom movement. The function was held to pay rich tributes to prominent mujahid commander Riyaz Rasool on his martyrdom anniversary. Paying while paying glowing tributes to the unprecedented sacrifices of Kashmiri martyrs to the cause of liberation, which is unforgettable role in the freedom movement, would be long remembered said that the struggle for right to self-determination would continue despite all odds. On this occasion, Bhat appealed to the world community to exert pressure on India to stop bloodshed of Kashmiris and also help the people of the territory in resolving the Kashmir dispute according to Kashmiris’ aspirations. He demanded of India to release all Kashmiri prisoners languishing in different jails in Kashmir and India with immediate effect and repeal all black laws. It stressed the need to find a just solution of the dispute through peaceful means of negotiations involving Pakistan, India and the genuine leadership of Kashmiris which was imperative for resolving the Kashmir dispute. .JKSM Chairman also called upon the Secretary General of the United Nations to depute a special envoy of the Human Rights Commission to investigate the recently discovered unnamed mass graves in Kashmir.
Posted by Unknown at 8:31 PM No comments: 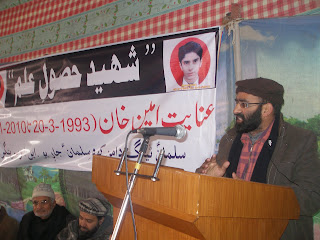 Posted by Unknown at 5:45 AM No comments: 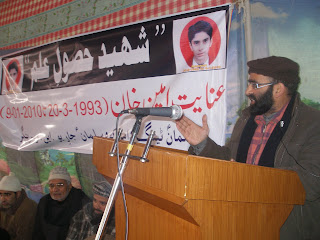 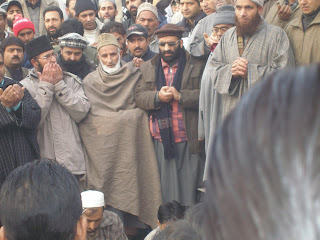 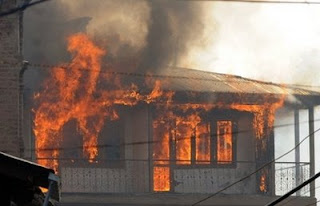 Indian army Commandos on Thursday stormed a hotel in Lal Chowk Srinagarkilling two Kashmiri liberation fighters, to end a 22-hour standoff that left also a civilian dead, sources said.
The two guerrillas, who attacked on Indian Central Reserve Police Force personnel threw grenades and opened fire Wednesday in Lal Chowk and later entered the Punjab hotel in the city centre and exchanged fire with Indian armed forces. "The operation has been concluded," Jammu and Kashmir police chief Kuldeep Khoda told reporters. "Two militants have been eliminated in this operation."
The Indian troops and paramilitary forces stormed the hotel shortly before noon and conducted room-to-room searches. "According to our information, two militants were behind the attack, but we are carrying out search operations to determine if there were more militants involved," Khoda added.
One dead fighter was identified by the Indian military agencies as Usman from Sopore.
Meanwhile, one identified as Muhammad Akbar Lone of Tangmarg of the eight civilians injured in the incident on Wednesday succumbed to his injuries on Thursday morning at the Soura hospital, the sources said.
The fighting also injured four Indian troops, a police officer said.
Dozens of armored vehicles swarmed the business district, which was closed to the public after the operation.
The injured civilians, who were hospitalized with bullet and shrapnel wounds, included a cameraman from a television news channel.
"We can only say that if there is no political solution to the Kashmir problem, these attacks are bound to happen," said Shakeel Ahmed Bhat, a software engineer with a shop in the area where the operation took place. Agencies
Posted by Unknown at 6:11 AM No comments:

Posted by Unknown at 5:57 AM No comments: